by Grace Chen
Nearly 52 percent of community college students in the United States begin their freshman year in at least one remedial class. These courses, which help students acquire knowledge and skills they should have acquired in high school, do not count toward their degree requirements. As a result, students are taking longer than ever to obtain their degree, if they obtain one at all.
Each year students and colleges in the United States spend about $3 billion on remediation. Remedial courses, or college prep courses as they are known at some institutions, are required for students who do not meet pre-determined performance standards for admittance into a college-level course. Most often, community college students who require remediation need it in English or math, or both.
The most recent statistics on the matter are sobering: About half of all community college students are placed in remedial courses, which 40 percent of students never complete. Nearly 70 percent of these students never make it to a college-level math class either. Further compounding the problem is that adjunct faculty members, who typically have the least experience teaching needy populations and often suffer from a general lack of institutional support, teach approximately 75 percent of remedial courses offered at community colleges.
This video claims that remedial education costs community colleges billions.
This is a problem seen nationwide. Over 46 percent of college-bound students in Maryland need some form of remediation. In California, the need for remediation lengthens the time students need to attain an associate’s degree by one full year and adds 20 credits to their coursework. In Virginia, 77 percent of students in the state’s community college system that are referred to remedial math courses do not complete them within three years. All this added coursework causes budgetary concerns for colleges that have to add more and more sections of non-credit courses, and worries employers who are concerned about the level of preparedness students will have when they graduate, which students in remedial courses are less likely to do. 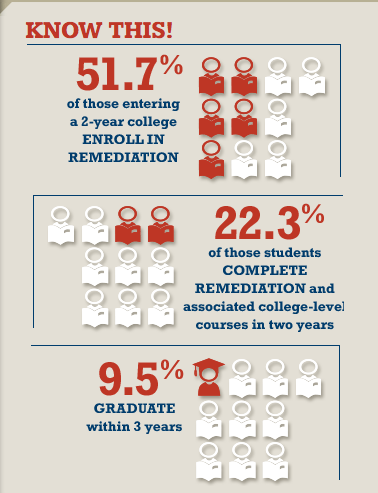 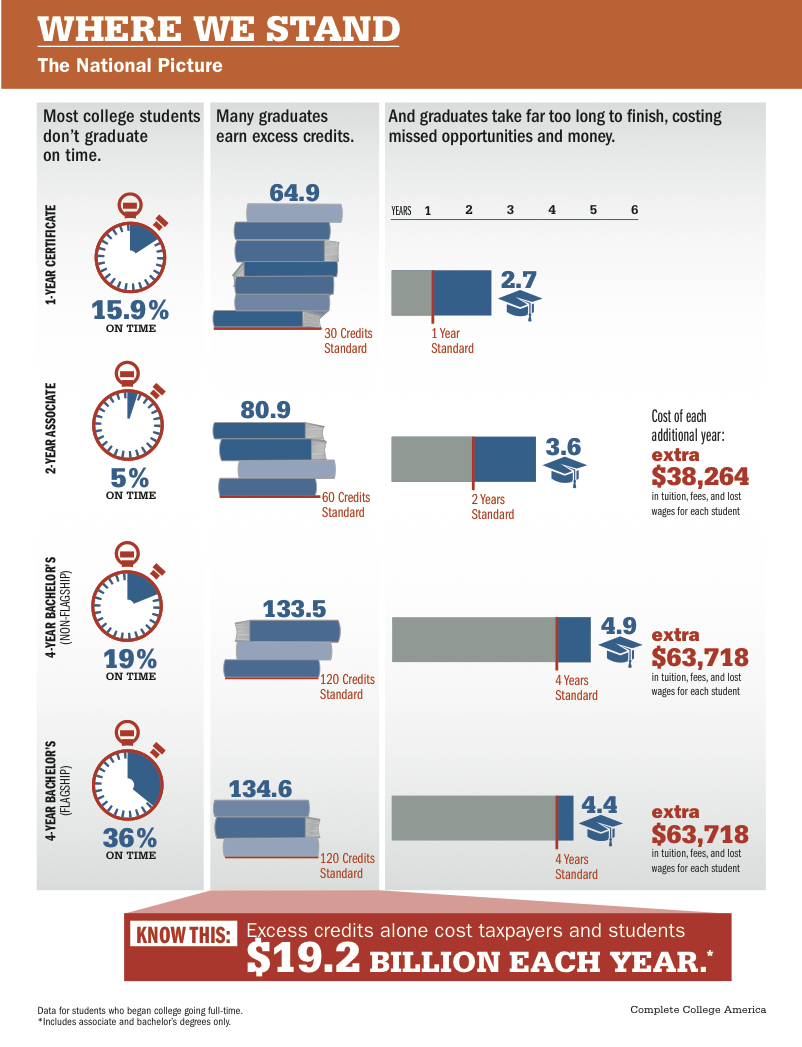 Solutions to the remediation problem have been proposed for years. Some education officials believe that the Common Core Standards will go a long way in improving students’ math and English skills before they get to college. Others believe that requiring four years of math in high school (instead of the standard three years in many districts) will boost understanding of mathematical concepts. Still, others propose doing away with high-stakes test scores, such as the ACT and SAT, as the primary determinant for a student’s placement in college classes, instead of relying on a range of factors to get a better picture of a student’s capabilities. Integrating remediation into college-level coursework, such as providing semester-long tutoring, is another potential solution that gets students into credit-producing courses and eliminates the need for standalone remedial classes.
Perhaps the most important proposed change, the need for which is most aptly demonstrated by the less-than-rigorous Complete College Georgia Core Concepts, is the disconnect between what students are learning in high school – and the rigor of the coursework at that level – and that which is expected of them in college. Much has been said about the need to streamline the transition of community college graduates to four-year institutions, but similar attention needs to be paid to the transition from high school into college. Increasing the rigor of content in secondary education and aligning the standards of performance between high school and college would diminish the need for remediation. As a result, students wouldn’t have to take math or English classes over and over again. Furthermore, colleges wouldn’t need to lower their standards because students would arrive prepared for actual college-level work.
Students in low-level courses are often embarrassed to be there and many experience crushingly low self-confidence in their ability to master concepts that they have struggled with in years past. A benefit shared by the proposed solutions above is that they would in some form or another help students overcome these obstacles. As a result, the dropout rate would decrease, retention rates would increase, and graduation rates would improve as well.
Yet, as bad as the remediation issue makes higher education look, according to Forbes, there are elements about our nation’s colleges that are encouraging:
Such good news demonstrates that the sky isn’t totally falling when it comes to higher education. But that doesn’t mean that there aren’t fixes to be made. At Ivy Tech Community College, the way that math is taught is being overhauled in a purposeful and beneficial manner, yet most students who arrive there still learn math the same old way their parents and grandparents did – focusing on memorizing formulas or learning complex mathematical concepts that have no applicability to their lives. Until that disconnect is resolved and K-12 education is aligned with true college-level expectations, students will likely continue to fill up remedial classes on college campuses, learning things they should have mastered years prior, spending millions of dollars on non-credit courses, and taking longer than ever to obtain a degree.
Questions? Contact us on Facebook. @communitycollegereview
Additional Resources [+]
comments powered by Disqus
An In-Depth Guide to Financing Options for Community College
Attending college is expensive but there are options for financing beyond just student loans. Keep reading to learn more.
Do You Need to Take the GRE for Community College Applications?
No matter where you choose to go to college you'll have to take some kind of standardized test. The GRE is often required for graduate programs, but it may also benefit your community college application.
Tips for Minimizing Educational Debt While in School
Education becomes more expensive with each passing year so it is important to make smart use of your student loans and to minimize your debt while you are in school whenever possible.