Community College Review Diversity Report: Which Campuses are Most Diverse?

by Grace Chen
What states are home to the most diverse and least diverse community colleges? In our exclusive diversity report, we analyze our data to determine how much diversity there is on community college campuses throughout the United States. In addition, learn about the benefits of attending a community college with a diverse student body.
Part of the college experience today is learning with, and learning from, people different from ourselves. However, in the past, some colleges were racially segregated - particularly in the South - until desegregation began in the 1950s and increased diversity at college campuses. While some colleges cater to specific populations, such as women, in general, college campuses are bastions of racial, ethnic, religious, and social diversity. This diversity lends itself to an enhanced educational experience, better preparation for working for companies with diverse employees, and a greater understanding of others. But where are the most diverse community colleges located? We collected data from community colleges in each state and analyzed it to determine how much diversity exists.
Diversity Scores of Community Colleges
In order to appropriately compare the diversity of community colleges, we mined student data and calculated diversity scores for each state. Specifically, we were interested in the presence of more than one ethnic group on campus. Our formula determines the likelihood that any two students at a college are from different ethnic groups. Scores closer to zero indicate less diversity on campus, while a score closer to 1 indicates more diversity on campus. For example, a college exclusively for African-American students would have a diversity score of zero even though the student body is comprised of an ethnic minority because other ethnic groups would not be present on campus. Conversely, a college with five or six ethnic groups on campus would have a much higher diversity score closer to 1.
Our state-level data presents many results that are not at all surprising. Highly populated states and states that have experienced significant growth, especially among minority populations, are among our states with the highest diversity scores. Among our least diverse states are those in the Midwest and New England regions of the country. These areas have seen little population growth and state in these regions do not have a high level of ethnic diversity. However, there are some unexpected entries, especially on our list of states with the most diverse community colleges. Indiana and Wyoming, two states with overwhelmingly white populations, both rank among the top four in terms of college diversity.
This TEDTalk makes the point that access to college doesn't necessarily mean diversity.
Most Diverse States
One might expect that largely populated states with the presence of many ethnic groups or large numbers of immigrants would be at the top of the list of the most diverse states. However, this does not completely hold true. Based upon our data, the ten states with the most diverse community colleges are:
It should be no surprise that California, Texas, and Florida – all highly populated states with significant populations of minorities – make the our top 10 list of most diverse states. California’s diversity score of .71 is due in large part to the enrollment of Hispanic students, who represent 35 percent of community college students in the state. In fact, of the 1.5 million students enrolled in California’s 241 community colleges, a whopping 63 percent are from a minority group. Texas shows a similar diversity profile, with 57 percent of community college students representing a minority group, 34 percent of which are Hispanic. Nearly half of students at Florida community colleges are minorities, with 24 percent of students identifying as Hispanic. It is no coincidence that each of these states ranks in the top three of fastest-growing states since 2011 according to the U.S. Census Bureau.
The big surprises on our list of most diverse states are sparsely populated states like Hawaii, Wyoming, and Alaska. However, data from the Kaiser Family Foundation sheds some light on these apparent anomalies. Although Hawaii is not highly populated, it is home to very large minority populations, particularly those of Asian descent and those who identify as native Hawaiian. In fact, just 18 percent of Hawaii’s residents are white, giving it one of the most diverse populations in the nation. This diversity is represented on the campuses of the state’s community colleges as well, where 86 percent of students are minorities, thus the reason why Hawaii’s diversity score tops the list at .75.
The most unlikely state to be on this list is Wyoming, where according to the Kaiser Family Foundation, 86 percent of residents identify themselves as white. Yet, an examination of Wyoming’s community college data explains the discrepancy: minority enrollment at Wyoming community colleges stands at 52 percent. This is far higher than the national average of 34 percent. Large populations of American Indians, Asians, Hispanics and African-American students at the state’s ten community colleges increase the state’s diversity score, even though the state population itself is highly homogenous and ranks among the least diverse in the nation. 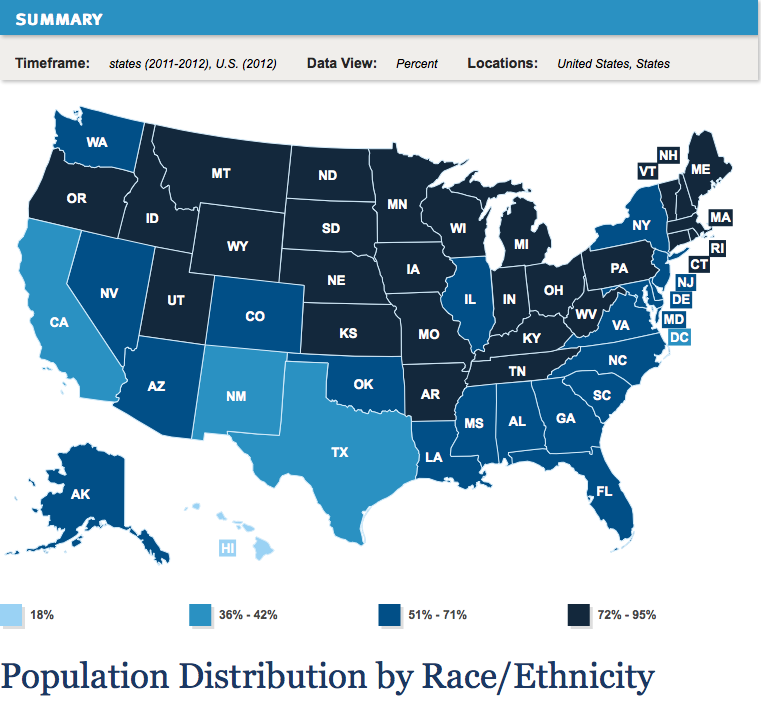 Source: Data Map of Distribution for the White Population by the Kaiser Family Foundation
Wyoming community colleges are an excellent example of how college campuses aren’t necessarily reflective of a state’s ethnic makeup. College students are free to select the school they choose to attend, so unlike many public K-12 school districts, community colleges are not bound by neighborhood or community boundaries that might prevent some ethnic groups from attending a particular school. Colleges attract students from across the nation and from many different ethnic groups. While this rings true for colleges in all 50 states, it is most evident at Wyoming community colleges.
Least Diverse States
The ten states with the least amount of diversity on their community college campuses are:
Unlike our top ten list of most diverse states, there aren’t really many surprises on our list of least diverse states. The states on this list have among the least diverse populations in the nation according to the Kaiser Family Foundation. In fact, only three states from our list – Idaho, Utah, and Nebraska - are not among Kaiser’s ten least diverse states. However, Idaho is fourteenth on the list, with 82 percent of its residents identifying as white, followed by Utah at number fifteen with a white population of 81 percent. At number 19 on Kaiser’s list is Nebraska, with 79 percent of residents identifying as white.
Generally speaking, the states on our least diverse list are rural and have shown little population growth over the last decade. According to the U.S. Census Bureau, New England and the Midwest have the slowest population growth and have relatively small numbers of ethnic minorities. The New England region grew by just 3.2 percent from 2000 to 2010. The Midwest showed similarly modest growth at just 3.9 percent. Community colleges in these regions are therefore reflective of their overall populations. North Dakota’s diversity score is just .13, which is not surprising given that only 7 percent of community college students in that state represent a minority group. Maine has the same diversity score and minority enrollment numbers. These states rank number 10 and number 1 on Kaiser’s list of the least diverse states, respectively. While Wyoming community colleges have been able to attract large numbers of minority students, thereby boosting that state’s diversity score, colleges in these states have not been able to do so as of yet.
This video from the CIRTL Network looks at diversity and inclusive teaching in community colleges.
Benefits of Diversity on Community College Campuses
The diversity found on many of our nation’s college campuses is reflective of the general population of our country. We are a nation of many peoples, languages, and traditions, and college is a place where we can learn about and gain an appreciation for such things. Additionally, many colleges today do not have an ethnic majority, which is where our nation’s population is headed. According to the Center for American Progress, over half the children born today are of color and by 2050 there will be no ethnic majority in this country. As our nation’s demographics change, so too do those of our community colleges.
Furthermore, minorities have typically been underrepresented in higher education. While 28 percent of American adults have at least a four-year degree, only 13 percent of Hispanics and 17 percent of African-Americans have a bachelor’s degree. Increasing the number of minority students on college campuses not only reverses the trend of minority underrepresentation, it fosters collaboration, innovation, and competition. With large numbers of minority students, especially those who are Hispanic, enrolling in college in the fastest-growing states, campuses are becoming increasingly diverse and reaping the economic benefits of well-educated, well-trained college graduates who can work well with people from varying backgrounds.
Lastly, building acceptance and understanding for those who are unlike us is a crucial benefit of diversity in college. Studies show that students who have a college experience with diverse groups are more tolerant, accepting, and understanding of others who do not share the same social, political, or religious beliefs. From a purely social perspective, this level of acceptance for others is necessary as our nation continues to become more color neutral. From an economic standpoint, experiencing diversity is essential as our workforce rapidly continues to represent more minority groups. According to the Center for American Progress, half of our nation’s workforce will soon be comprised of minorities. With the economic future of our country resting squarely in the hands of rapidly growing minority populations, it is essential that today’s college students develop an appreciation for multiculturalism.
Questions? Contact us on Facebook. @communitycollegereview
Additional Resources [+]
comments powered by Disqus
An In-Depth Guide to Financing Options for Community College
Attending college is expensive but there are options for financing beyond just student loans. Keep reading to learn more.
Do You Need to Take the GRE for Community College Applications?
No matter where you choose to go to college you'll have to take some kind of standardized test. The GRE is often required for graduate programs, but it may also benefit your community college application.
Tips for Minimizing Educational Debt While in School
Education becomes more expensive with each passing year so it is important to make smart use of your student loans and to minimize your debt while you are in school whenever possible.