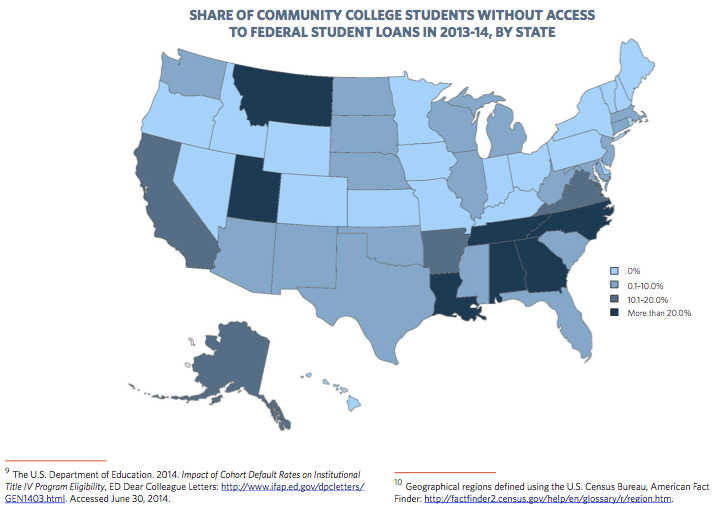 Institutions that have a significant default rate can be banned from receiving federal aid of any kind, including scholarships, Pell grants, and federal work study funding. In some states, such as California, schools can lose access to state funding as well. In light of the disaster that kind of funding loss would be, some colleges have chosen instead to not participate in the loan program offered by the federal government.
Nearly two-dozen community colleges in California, which represent more than 12 percent of that state’s total community college enrollment, do not offer federal loans. That places California firmly in the middle in terms of student access to federal loans. In some states, all community colleges still provide access to federal aid, while in Louisiana, over 44 percent of students attend a school that has dropped the federal student loan program. According to the Institute for College Access and Success (TICAS), the states with the largest percentage of students who do not have access to federal student loans are located in the South:
However, this is not to say that schools outside of the South aren’t also declining participation. Over one-quarter of Utah’s community college students cannot get federal student loans, nor can 21.9 percent of Montana’s students. Yet many states in which all institutions of higher learning offer federal loan programs are located in the West:
Many states in other areas of the nation, including New England and the Midwest, also have 100 percent of students able to participate in federal student loan programs.
Problems with Private Loans
While altogether not offering federal student loans provides some measure of fiscal protection for community colleges, it puts some students in a significant financial bind. Only two percent of community college students are able to cover their educational expenses wholly with federal grants. So for the majority of students with financial need, without federal loan access, far riskier sources such as credit cards, which often have variable APRs and negatively impact students’ credit scores as their card balances rise, are used to pay for schooling.
Another bad option for funding one’s education are private student loans. Offered by local and national banks, as well as some unsavory websites, private loans have higher interest rates than federal loans. What’s more, many private loans lack the flexible repayment options featured by federal loans, such as deferment or forbearance, which allow a borrower to postpone their payments for a specified period of time, or income-based repayments, which adjust a borrower’s payment based upon their annual income. Private loans are also based on a student’s credit history, which for some low-income students is insufficient to procure a loan. In many cases, students must have a co-signer in order to qualify.
Despite the shady nature of some privately-funded student loan programs, at least 20 community colleges that have opted out of the federal loan program promote private loan companies on their website. For some students, this de facto endorsement may be enough to put their fears about private loans to rest, only to find out years later that it was a very big mistake to take out such a loan.
Protecting Your Bottom Line
There are a number of actions students can take to protect themselves from the financial weight of paying for school with a credit card or a private loan. First, before even applying to or enrolling in a college, investigate whether that institution participates in the federal student loan program. If they are not a member institution, look into the possibility of attending another college nearby that does.
If attending another school is not feasible, exhaust all other financial aid opportunities before taking out a private loan. A surprising number of students are eligible for Pell grants and scholarships and don’t even know it. And while asking family or friends for money to pay for school may be embarrassing, it’s definitely less expensive than taking out a high-interest private loan. Work-study programs are also available, as are special programs for students who have served in the military, students who have a disability, and many specialized populations such as minorities and single mothers.
Many community colleges also offer financial aid counseling to help students determine how much money they need for school. Counselors will work with students to devise a budget based on their educational and career goals, expected income after graduation, and factors that will impact their ability to repay loans. Taking advantage of these services will help a student avoid over-borrowing and set them up for financial success after graduation.
Lack of Federal Loans Impact Minorities
While all students at an institution that doesn’t offer federal student loans are negatively impacted, the groups that hurt the most are minorities. For example, TICAS reports that while 8.5 percent of all community college students cannot get federal student loans at their school, minority groups are disproportionately affected. Over 12 percent of African-American students, 10.5 percent of Latino students, and a whopping 20.1 percent of Native American students attend schools that do not participate in the federal loan program. Only Asian students fared better than white students when it comes to having access to these funds. 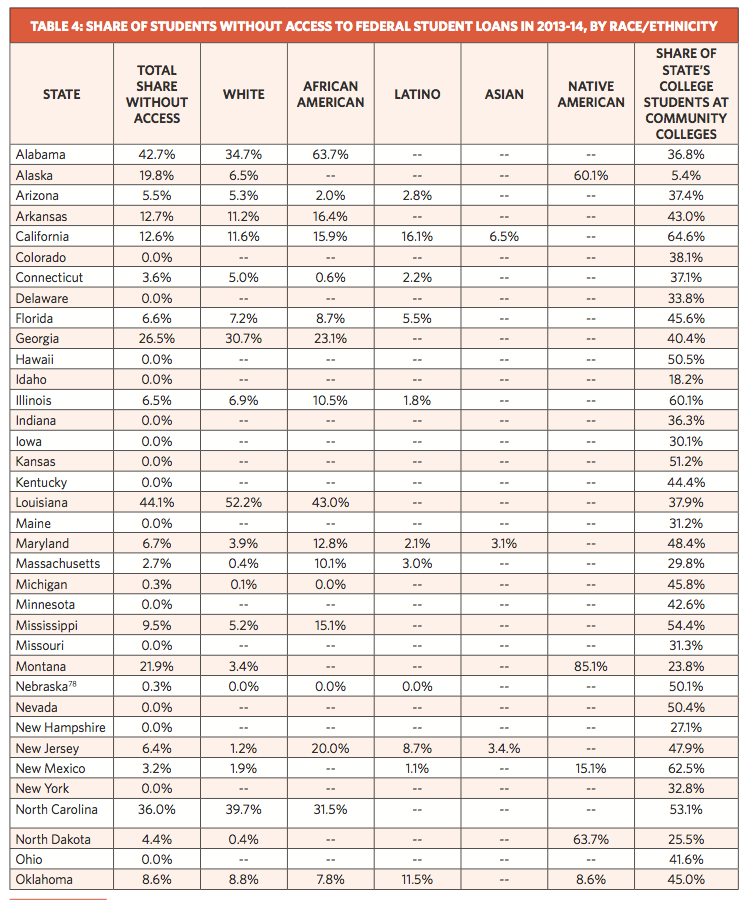 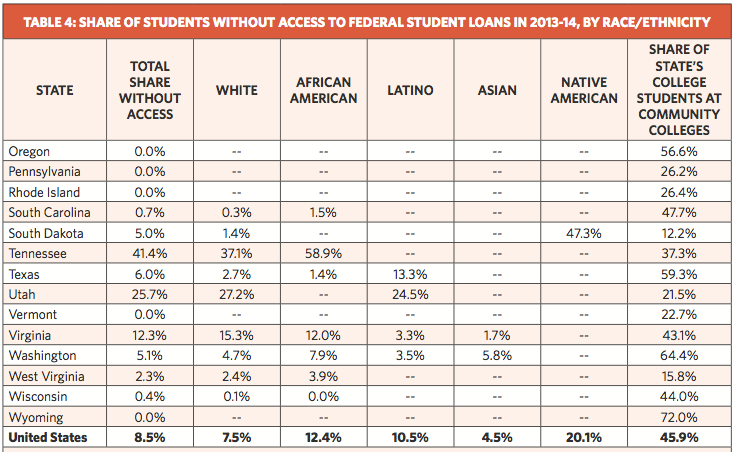 Source: The Institute for College Access and Success
The reality is that the students who are most likely not to qualify for scholarships, or for whom grants do not cover all their expenses, are the ones most likely to attend a community college that doesn’t offer federal loans. To cover the gaps, many of these students rely on credit cards or private loans, or work multiple jobs in order to pay for their education. The more students work, the less likely they are to graduate. And many of those that do graduate have incurred risky debt to do so and are more likely to default.
While some look at the data and are pleased that “only” one million students are not eligible for federal loans, others see yet another barrier for the most disadvantaged students to receiving an education. When education is a primary key to ending the cycle of poverty, the decision by community colleges to discontinue offering federal student loans doesn’t just impact a student’s bottom line, it has a direct impact on their ability to climb the socioeconomic ladder.

Is President Obama's Plan for Free Community College Right for America?
Recent Articles
December 24, 2021
Avoid Losing Community College Credits When Transferring to a University
One out of 10 community college students lose their credits when they transfer to a four-year university. Don't become one of these statistics, and learn how to ensure your hard-earned credits are transferred.
December 21, 2021
Second Rate? Community Colleges Fight Stereotypes
Many common myths about community colleges exist, but as they continue to diversify and offer cutting-edge programming, two-year institutions are fighting back against these long-held stereotypes.
December 21, 2021
California Virtual Community College System Increases Choices, Transfers
The Online Education Initiative will greatly expand course offerings for community college students, while making the transfer process between institutions much more smooth. The Initiative has its critics, however, who decry the loss of local control over education.

Our articles will provide you with the tools and resources needed to make sure you are qualifying for all the financial aid available, as well as maintaining your aid throughout your college career. Get the latest news on student loan interest rates, learn what to do when your financial aid is late, and explore all of your financial aid options.

Most Popular Articles
Why Do Community Colleges Get a Bad Rap?
Top School Listings by Category
How to Earn Your Associate's Degree in Less than Two Years
International Students Enjoy Free Tuition at US Community Colleges
The Reverse Transfer Process