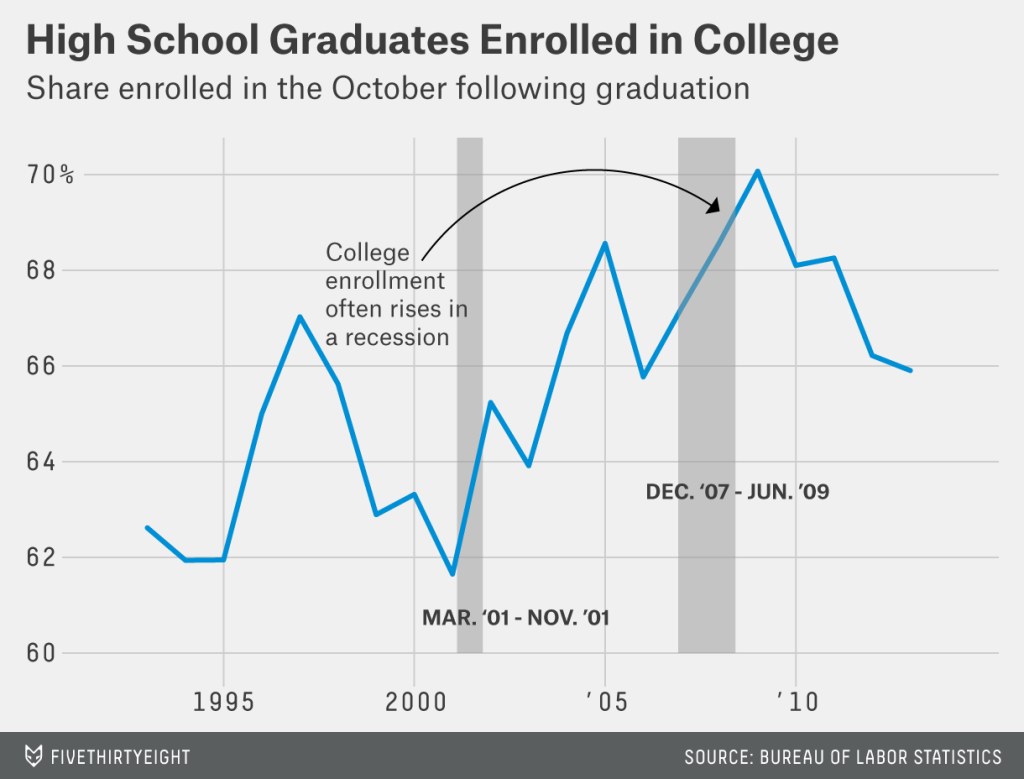 More stringent eligibility requirements for federal financial aid are a third reason for declining enrollment. While the income threshold to qualify for a Federal Pell Grant has been lowered from $30,000 per year to $23,000 per year, eligibility for the program, which provides funding for the most poverty-stricken students, has been reduced from nine years to six years. Without the means to pay for college costs, many of the students who could utilize these funds beyond the six-year deadline have either dropped out of school or elected not to pursue higher education at all.
A final possibility, and likely the most important for community colleges as they devise plans to boost enrollment, is the perception of declining returns for a college education. This year, college enrollment for 16-to 24 year-olds saw it’s steepest decline in the last twenty years, and only 66 percent of high school graduates in 2013 enrolled in college, the lowest number in eight years. According to the Economic Policy Institute, this is a direct result of the unemployment rate for college graduates, which in 2014 stands at 8.5 percent. While the recently graduated always have a higher level of unemployment, what is alarming is that the unemployment rate for this group has risen three percent in spite of the recovering economy and an improved job market in recent years.
The really scary number for recent college graduates is the rate of underemployment, which the Economic Policy Institute currently estimates at 16.8 percent. The underemployed include people who work part-time because they cannot find a full-time job, people working in jobs that require less education and skill than they have, and people who have actively sought out employment but cannot find it. When one-fourth of the college graduates in a given cohort cannot find a job at all or are forced to work in low-wage jobs, it’s understandable why potential college students may elect not to bother with a college education.
How to Stop the Bleeding
Community college enrollment will always be susceptible to the ebb and flow of the economy, simply by virtue of the demographics of the typical community college student and the kind of courses and certificate programs that community colleges usually offer. Yet, experts maintain that there are ways that community colleges can better insulate themselves from economic changes.
First, education officials agree that community colleges have to take the needs of the nearby community into account when devising programming. For example, Howard Community College in Maryland offers many programs that are attractive to the thousands of federal employees who live and work in nearby Washington, D.C. As a result of their savvy program development, the college has seen increases in enrollment each year since 2007 – even when other community colleges in the state are in an enrollment free-fall.
Second, community colleges need to do a better job of helping their current students find success so they remain in school and complete their degree, whether at that institution or by transferring to another. According to a 2012 report, less than half of community college students complete their degree or transfer within six years. These poor numbers are attributable to many factors, not the least of which is that most community college students – over 40 percent – are first generation attendees who may not have the support at home or at school to see things through to graduation. Ensuring those students, in particular, have access to resources like tutoring, remedial courses, and academic and career counseling will help improve retention numbers and stabilize enrollment. 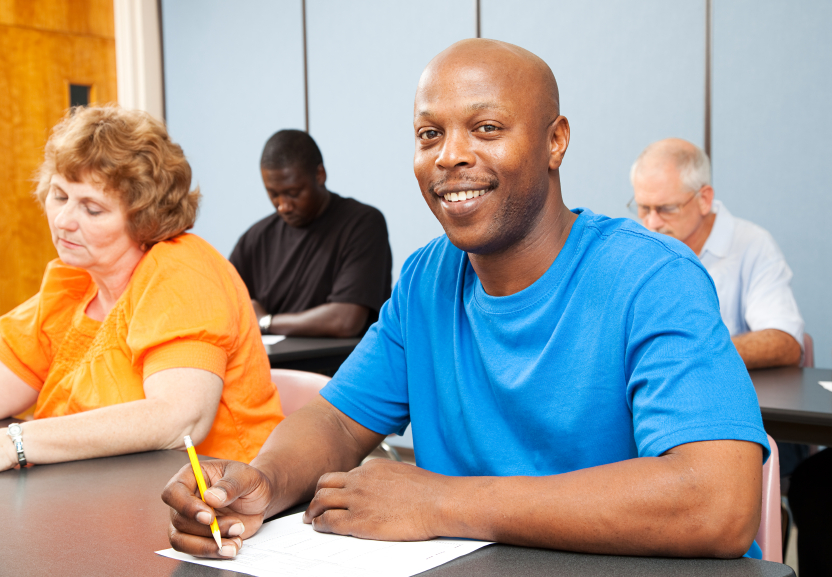 Lastly, community colleges were originally established as a first point of contact for people who wanted to enter college but couldn’t afford to do so at a state or private four-year institution. Students may have enrolled at a local community college to take a few classes without much of a plan to graduate or transfer. Today, however, community colleges fulfill other roles. Many have transformed themselves into workforce readiness centers, where unemployed and underemployed workers can quickly learn new skills in high-demand areas. Still other institutions have entered into agreements with in-state universities to make the process of transferring credits less of a headache.
Of the 30 jobs the Bureau of Labor Statistics estimates to have the most significant growth in the near future, nearly all of them involve a vocation that community colleges have come to specialize in, especially nursing and other medical related occupations. However, community colleges cannot take a single-pronged approach to boost enrollment. If community colleges are to insulate themselves from the ups and downs of the economy, they will have to focus on more timely course offerings, improved campus experiences, streamlined enrollment and admissions procedures, and on student success measures such as those mentioned above. If they don’t, they risk falling off their own financial cliff, just like the economy did in 2007.
Additional Resources [+]
comments powered by Disqus
Calling All Entrepreneurs! How Community Colleges Can Help You Start Your Business
Learn about the courses and resources available at your community college that can help you start the business of your dreams.
Community College Degrees for Midlife Career Changers
Learn about some of the most popular midlife career changers that you can launch with a community college degree.
ChatGPT: A Powerful Tool With Many Uses
When your database is the entire Internet, you can answer just about any question lightning-fast. Here are some suggestions for using ChatGTP in your college studies.