On Saturday, February 11 the Twitter handle @CNN (CNN News) posted a link to a news article regarding San Francisco’s decision to offer free community college to all residents starting in the fall of 2017. San Francisco will be the first U.S. city to make this choice and it has many residents in uproar, considering that the tuition costs will be paid for by property taxes equaling more than $5 million. CNN news writer Katie Lobosco reports that this tax is called the “real estate transfer tax” and it was increased in 2016 for both commercial and residential properties, an increase that was approved by voters in November of 2016. 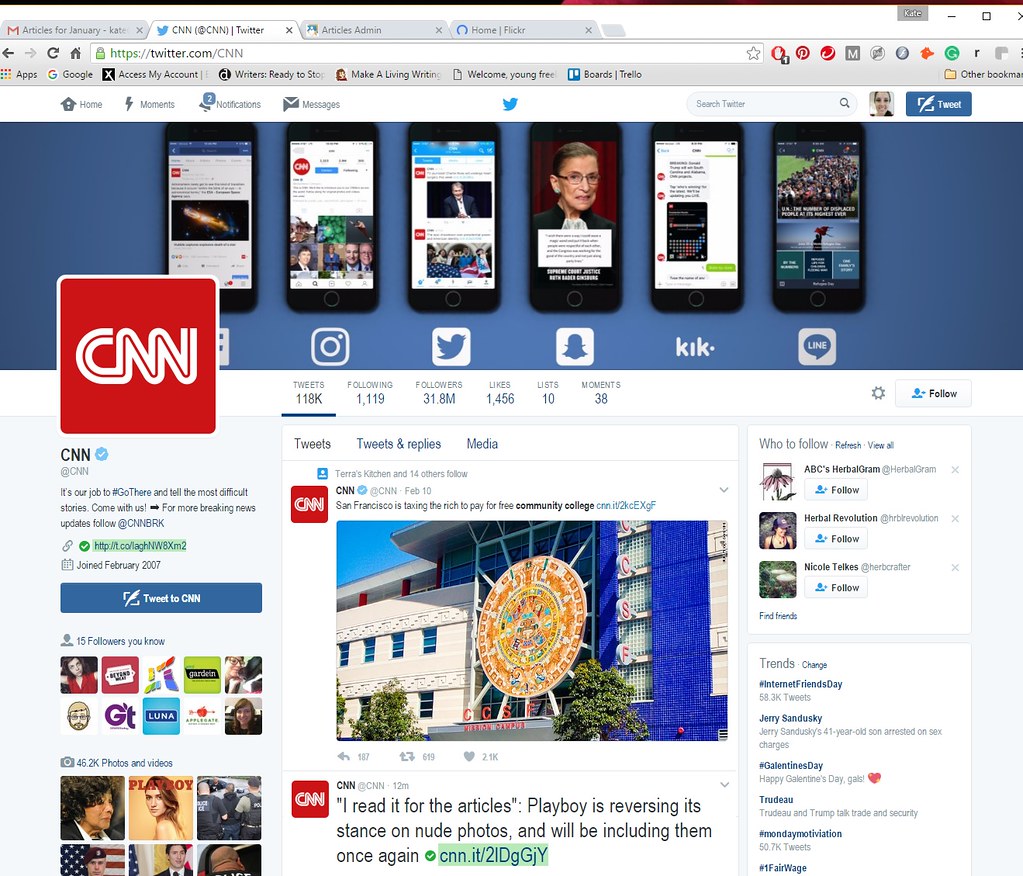 The real estate transfer tax begins at 2.25% and goes as high as 3% for properties with an estimated worth exceeding $25 million. The tax is expected to bring in an average of $45 million per year. Though much of the money will go toward community college tuition, it actually goes into the city’s general fund so it can also be used to provide senior support services as well as affordable housing. The move for free tuition is expected to affect nearly 30,000 students who currently attend City College of San Francisco, though Chancellor Susan Lamb makes note that the school has the capacity to accept up to 85,000 students. The move for free tuition is expected to encourage more students to enroll.

Tuition-free programs exist in other states, but San Francisco’s program is much more progressive. The city has committed $5.4 million per year for the next two years, including a one-time stipend of $500,000 to the college to help deal with the influx of new students. This change will cover the $46 per credit cost for all residents (regardless of income) and there is no requirement that students be recent high school graduates or full-time students. Each student will be required to pay the $17 per semester fee as well as the cost for books, housing, and other living expenses. But what really sets San Francisco’s program apart from the rest is the fact that low-income students can receive additional aid to pay for these other costs.

On Monday February 13, twitter handle @bombaeshae posted a link to a CNN news article covering Detroit’s move to make community college free for students. This move happened in March of 2016, but it is likely resurfacing due to San Francisco’s release of a similar program. Known as the Detroit Promise Zone program, this program allows any graduating high school senior to attend one of Detroit’s five community colleges without paying a dime for tuition. The funds for this program come from a private scholarship foundation but next year, in 2018, property taxes will start to pay for some of the program – these taxes have already been earmarked. 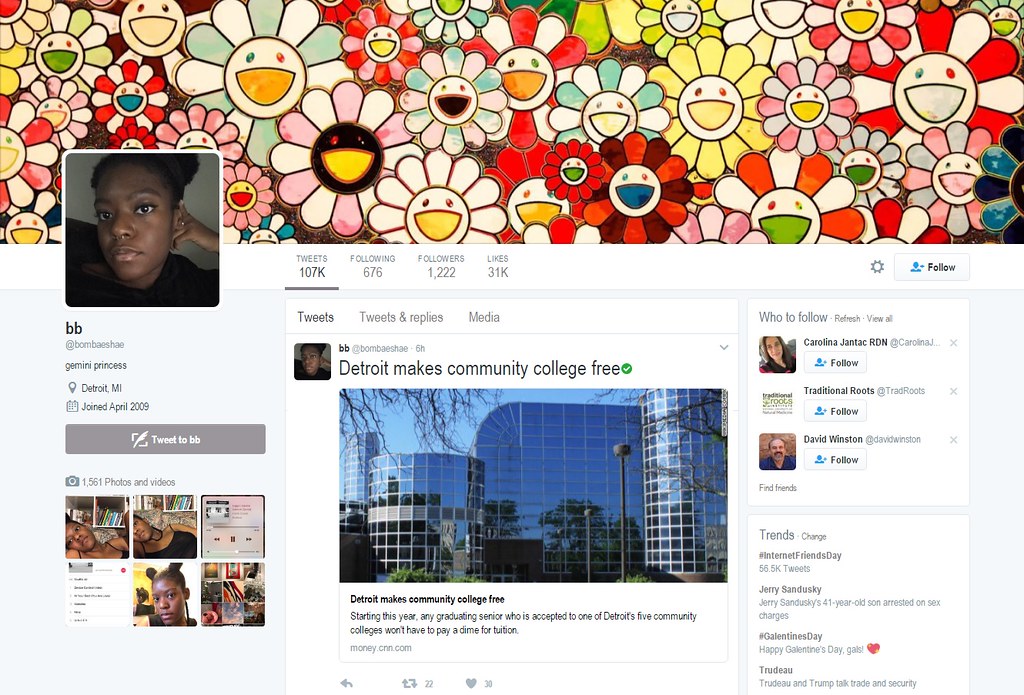 The Detroit Promise Zone program currently only applies to Detroit’s community colleges, but Mayor Mike Duggan hopes that it will eventually be expanded to cover the cost of four-year programs at Detroit state schools. In order to be eligible for the program, students must have completed their junior and senior years at a public, private, or charter school in Detroit. The program is available for all eligible students, regardless of income, but students must fill out the FAFSA federal financial aid form. After any federal or state grants and scholarships are applied, the program will pick up the rest of the tab.

In the first year of the program, 500 students were expected to take advantage and enroll in a Detroit community college for the fall 2016 semester. The amount of scholarship will vary for each student, but the average cost is estimated at $680. The Detroit Promise Zone program is part of a citywide effort to improve the future of Detroit, making it a more desirable city for individuals and families. Penny Bailer, Chairwoman of the program, hopes that the program will benefit the city’s future leaders by making their education available at no cost.

Hunger and Homelessness on the Rise with Increases in College Costs

In contrast to the good news about tuition-free community college in some cities, Twitter handle @NPR posted on February 8 about something shocking. Though several cities across the United States have begun offer tuition-free community college benefits to residents, for students who don’t live in these cities, costs continue to rise. In an article published by NPR, writer Kirk Carapezza tells the story of a first-year student at Bunker Hill Community College who was homeless at the time she enrolled. After spending time at an unsafe homeless shelter in Boston, this student added her name to a six-month waiting list at a slightly safer shelter in the hopes that she would be able to live and study safely while attending classes at Bunker Hill. 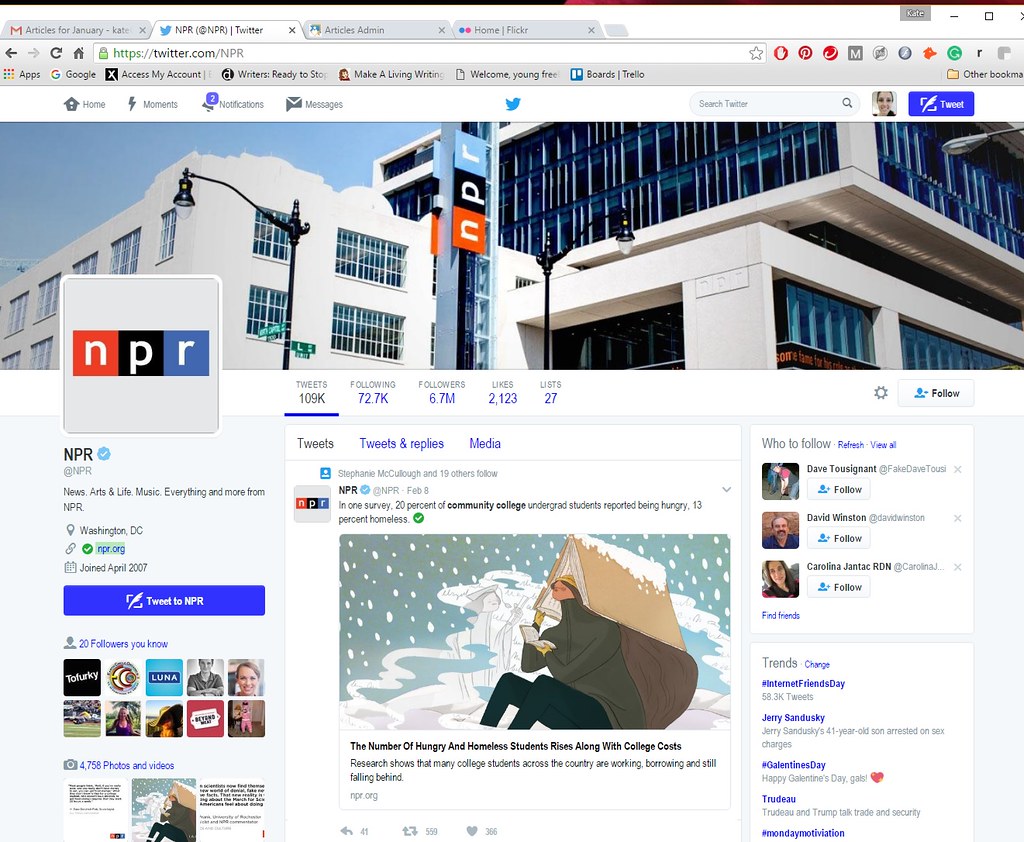 This story may be shocking to some, as many people assume that community college is always the most affordable option. But that doesn’t take into account the fact that many people who enroll in community college are starting at the bottom and trying to work their way up. In fact, researchers at the University of Wisconsin who surveyed over 4,000 undergraduate students attending community college around the country reported that 20% of students were hungry and that 13% of students were homeless. Many of these students are working while they take classes and many are borrowing money in the form of loans. But for some, all of these things still leave them so short that they end up going without basic necessities like food and shelter.

Attending college, in whatever shape or form, is something that countless high school graduates across the country take for granted. With federal student loan programs and scholarships, many students are able to afford a college education, often with the help of their family. But for some students, even low-cost community colleges are too expensive. Hopefully, in the coming years, programs like those San Francisco and Detroit have begun to offer will become more commonplace, allowing more young adults to lift themselves out of the cycle of poverty to become all that they are capable of being.

Additional Resources [+]
comments powered by Disqus
Calling All Entrepreneurs! How Community Colleges Can Help You Start Your Business
Learn about the courses and resources available at your community college that can help you start the business of your dreams.
Community College Degrees for Midlife Career Changers
Learn about some of the most popular midlife career changers that you can launch with a community college degree.
ChatGPT: A Powerful Tool With Many Uses
When your database is the entire Internet, you can answer just about any question lightning-fast. Here are some suggestions for using ChatGTP in your college studies.