by Grace Chen
President Obama recently introduced a plan to deliver free Community College tuition to all Americans across the country. Is it the right call?In this story, we will not attempt to make a judgment call on whether free Community College is right or wrong for the United States. Instead, we paneled a few experts in education and economics to get their take on the issue. We’re showing both sides of the coin, and letting readers decide on their own.

Last week, President Obama introduced a plan to deliver free Community College tuition to all Americans. Is it the right call?

In this story, we will not attempt to make a judgment call on whether free Community College is right or wrong. Instead, we paneled a few experts in education and economics to get their take on the issue. We’re showing both sides of the coin, and letting readers decide on their own.

The Case for Free Community College

The democratization of Higher Education

The most prominent supporters of Obama’s plan laud the proposal as a right step in the right direction toward an equal democracy. One such organization, University of the People, offers tuition-free degrees to many students who would have been shut out of the opportunity to attend college otherwise. Founder and President Shai Reshef says, “According to the proposed plan, students could save an average of $3,800 a year. It is known that the average student spends as much as $1,200 each year on textbooks and supplies alone.”

Rasheen Carbin, Co-founder, and CMO of career app nsphire, says Obama’s plan is the right step for America. “As we all know, the price of college has skyrocketed. We also know, having a Bachelor’s degree adds about a million dollars to your lifetime earnings.” Rasheen is adamant that free community college can lift a burden on lower-income families, and close the gap between poor and wealthy classes in the U.S.

“College is still a very elite institution. Only a quarter of Americans go to college (including community college). Obviously, there are still significant barriers to people, even being able to make this first step.”

Patricia Villasenor, Executive Director of the City of Los Angeles Human Relations Commission, believes Obama’s plan can help boost the middle class. “Experts constantly reference the vanishing middle class. There is a wide variety of vocational training degrees offered through community colleges, which often lead to high-growth/high-wage careers. Through training and development, families can maintain a quality of life above the poverty level.”

This TEDTalk makes a case for a free community college education.

Supporters argue that a more democratized, educated America will also lead to a more robust economy and competitive workforce. Rasheen continues, saying that college is the right thing to do in terms of equality and for the economy of local communities. “Community colleges also have a responsibility to their communities to produce well-trained employees for local industries in the areas. By increasing access to community college training programs, employers will get better-trained employees and become more productive. Investing in education is a long-term investment that will pay tenfold vs. any short term economic hiccup we may see.”

Albert Mitchell II, Founder and Executive Director of NJ MED is right on Rasheen’s side. “Without a higher educated and skilled U.S. workforce, the U.S. is asking for trouble in the 21st century!”

Patricia Villasenor says a more robust education system is imperative for the United States to compete globally. “By making community college free for all Americans, we invest in human capital, strengthening our economy. By eliminating the financial component, we open opportunities to the brightest regardless of their socioeconomic background, thereby diversifying countless industries that play a role in enhancing our nation's infrastructure.” Daren Upham, Western Governors University’s Vice President of Admissions and Enrollment, is also on board. "The U.S economy relies on having a trained and prepared workforce, and we need to do all we can to provide more affordable pathways to degrees. Since our founding, Western Governors University’s focus has been on helping more Americans earn a respected college credential more affordably. 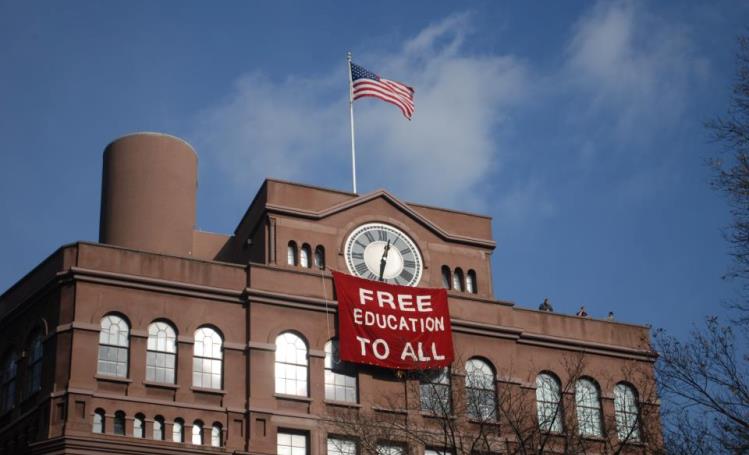 The Case Against Free Community College

Joe doesn’t see a need for the government to fund college when it is already at such an affordable rate. He backs up his point with raw numbers. “The average cost of a public, two-year in-district college is $3,347, according to the College Board. Anyone with an income of less than $160k spending $4k on tuition and books gets a $2,500 tax credit (American Opportunity Credit) to cover those expenses. If you fill out the FAFSA, you automatically qualify for a federal student loan to cover the balance. A community college student might end up with a $1,500 loan.* After making the $50 per month minimum payment, the loan s paid off in under 3 years. If you have an adjusted gross income (AGI) of up to $53K (*which is the median family income*), you are eligible for a Pell Grant that combined with the above mentioned AOC will cover the full cost of college!”

Joe believes the government is already taking the extra steps in terms of making education affordable. “While I am all for reasonably priced education, the federal government already makes community college virtually free to those families that need it. The government should not be funding college for those that should be able to afford it.”

Still More to the Answer

Cengage Learning CEO Michael Hansen is an advocate for improving higher education but believes there is more to the answer than increased college access. Instead, Michael stresses the importance of solving the problem concerning dropout rates.

“Community colleges are the core and the centerpiece of the US higher education system. Dropout rates are way too high. I believe that with the appropriate use of technology and the appropriate focus on the student experience, we can materially affect those dropout rates.”

Michael believes we need to focus more on the current student experience at community colleges than on increasing access. “Just providing more access is not going to be the full answer; it's going to be part of the answer. The critical thing we have to focus on is understanding when and why these dropouts happen in community colleges."

“This will ultimately determine the competitiveness of the United States in the World. If we can’t solve this problem, we will decline in competitiveness.” How do you feel about Obama's plan? Let us know in the comments below!

Questions? Contact us on Facebook. @communitycollegereview
comments powered by Disqus
Careers: Marine Biologist
Combine underwater adventures with scientific discoveries and crystal blue waters, and you may have a dream career as a marine biologist. Learn about how you can start your marine biology training right at community college!
Cursing in the Classroom: Professor Ousted for Swearing
In a Hawaii community college philosophy course, a professor used profanity to get students' attention and inspire independent thought, but the efforts may have backfired.
Why Community Colleges Will Soon Be Accepting High School Sophomores
The next wave of community college students may just be high school sophomores. Learn about the new program that allows high school sophomores to graduate at 10th grade and proceed directly to community colleges.