by Grace Chen
Earlier this year, President Obama outlined a proposal that would make community college free for millions of community college students. What does it mean for you?
So you want to go to college but can’t afford it. Perhaps you don’t want to take out loans that will take you decades to pay off. Or maybe you don’t think you’d get many (or any) scholarships or grants because your grades are just good enough but not that great, or because you make just enough money to not be considered in great financial need.
If the President has his way, none of this will matter.
In January in his State of the Union Address, President Obama outlined a $60 billion plan that would make community college free for everyone. And while ‘everyone’ doesn’t actually mean everyone, the plan still would open a lot of doors for students who may not otherwise be able to attend college.
What are the Criteria?
The criteria for tuition-free community college under the Obama plan are fairly straightforward. Students must maintain at least a 2.5 GPA, which works out to a smattering of Bs and Cs – grades that are easily achieved by most students. Attendance must be at least half-time, which is typically considered to be six or more credit hours each semester. That’s just two classes per semester, which again, is easily achievable by most students, even those that work or have other obligations outside of school. In short, students that put in the effort would get a free education.
There is, however, a third criterion. Presumably to limit the long-term costs of the program, the plan would be made available only to students whose family’s Adjusted Gross Income (AGI) is under $200,000 per year. While this news would not impact poor, low-income, and lower-middle-class students, those students from middle and upper-middle-class families would not be able to take advantage of the program. Although it might be assumed that this income cap would impact a large number of community college students, it would not. A mere 2.7 percent of dependent community college students come from a family with an annual income greater than $200,000, meaning the vast majority of today’s students would qualify for the program, at least from an income perspective.
Would It Work? 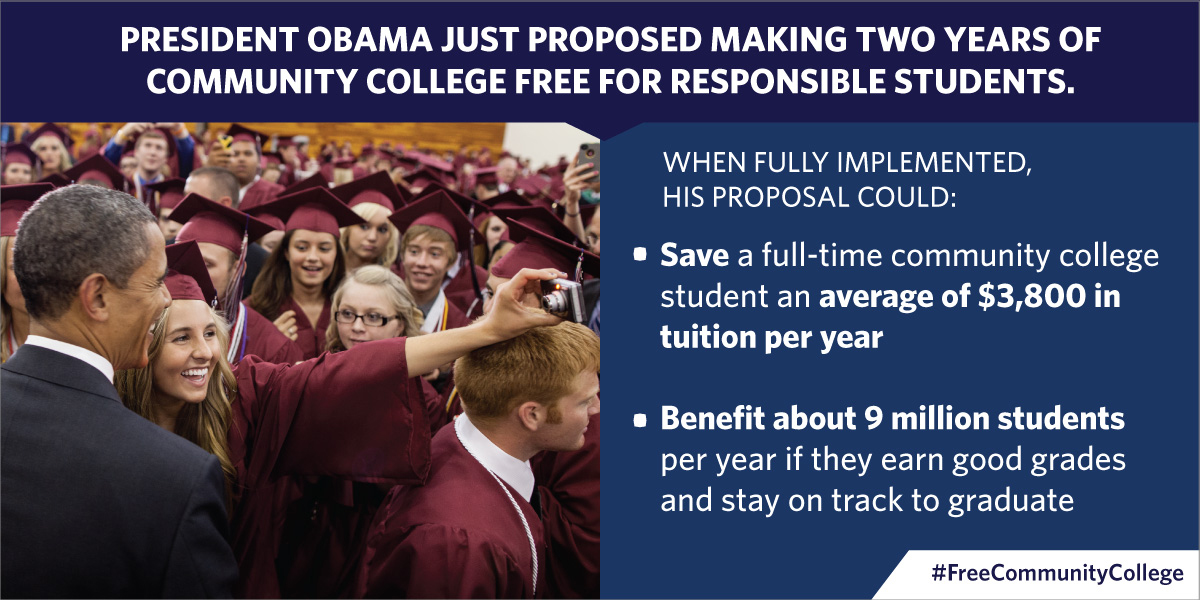 Although a nationwide program to make community college free has never been undertaken, several states have made such a move. In Tennessee, a whopping 90 percent of high school seniors are enrolling in college as part of that state’s free college plan, called Tennessee Promise. Tennessee Promise offers eligible students two years of tuition-free education at the community college or technical school of their choice.
Efforts in other states to make community college more affordable are on the table. In Oregon, state lawmakers are pushing for a plan similar to Tennessee’s, which might encourage the estimated 70,000 idle youth in Oregon – young people between the ages of 16 and 24 who have no job and are not attending school – to head to college. In California, students have for decades been able to get a community college education basically for free. Nearly two-thirds of that state’s 17- to 19-year olds receive a full tuition waiver because they meet low-income restrictions. Furthermore, students that receive a Pell grant also receive a tuition waiver, meaning they have additional money for associated expenses such as room and board.
Other efforts to reduce college expenses have had varying levels of success. In New York City, roughly half of students in the City University of New York system pay no tuition due to federal and state tuition assistance programs. Lawmakers in Mississippi and Massachusetts have proposed tuition-free plans in the past, only to see their proposals die on the table.
The Obama plan would essentially mimic these existing and proposed state plans but on a much larger scale. The success of the Tennessee Promise plan (upon which Obama’s plan is based), in particular, seems to indicate that a nationwide tuition-free plan for community college would be feasible and offer a strong measure of success for community college students.
Why Now? 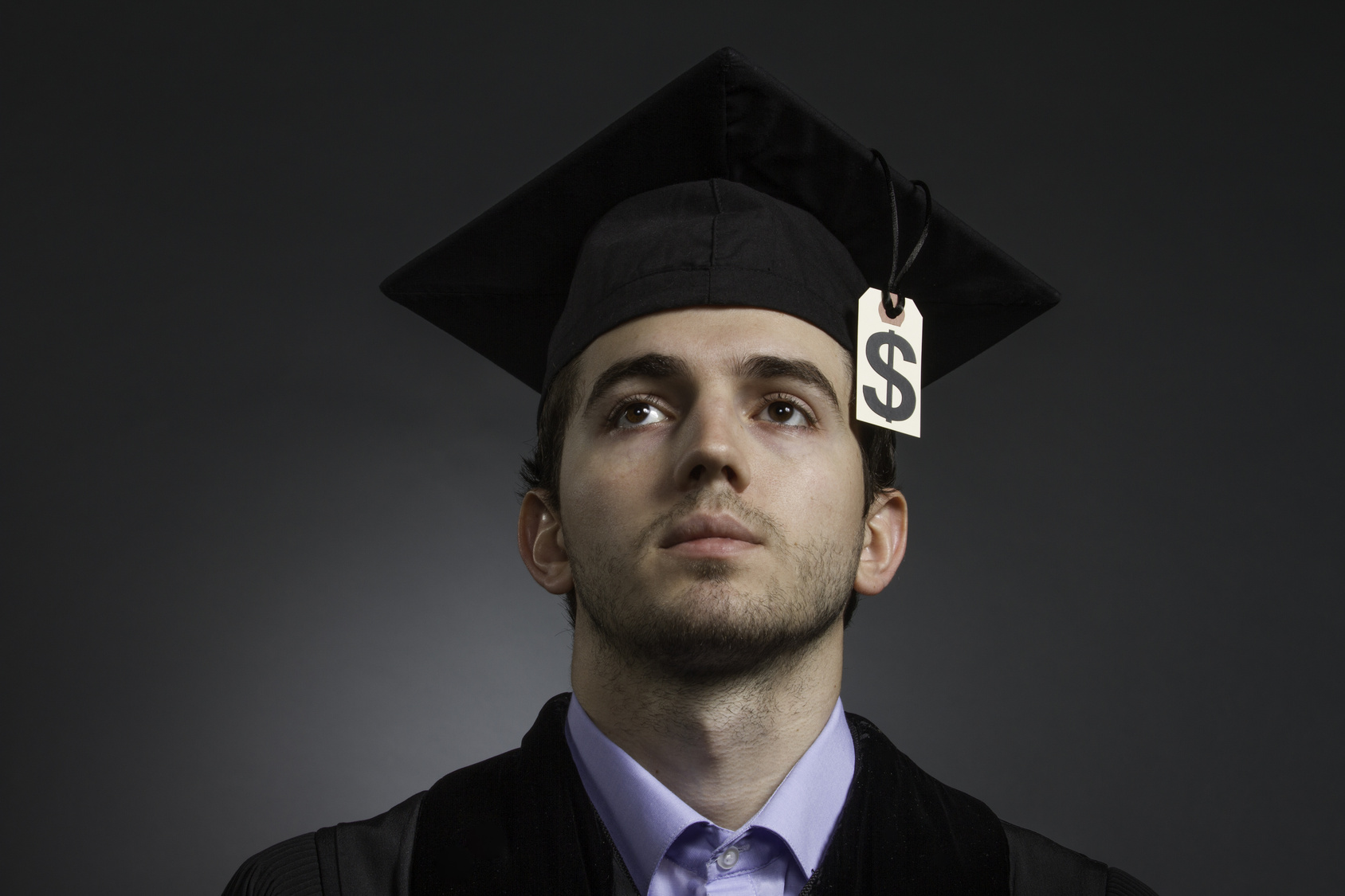 Certainly the rising cost of college is a central reason why President Obama has chosen to tackle this issue now. But other reasons highlight the need for such a program.
In his speech, President Obama drew a comparison between community college today and high school one hundred years ago. Back then, business and industry needed workers with basic skills, thus universal K-12 education took root. However, today’s in-demand jobs require far more than basic skills students acquire in high school. While plenty of jobs are out there for high school graduates, good jobs (with good incomes) require at the very least a two-year degree or certificate.
As the economy has shifted in recent years to more vocationally based occupations, community colleges have borne the majority of the burden of training workers for these highly technological positions. With many of these jobs, such as those in the healthcare industry, in dire need of workers, making tuition free would bring more students into the educational fold, while also preparing more workers for the continued demand for services.
Another reason why the President’s plan is being mentioned now is because the economy is finally recovering from the Great Recession. With more money in the coffers, the government’s ability to foot the bill for a 10-year, $60 billion program is greater than it has been in years. However, just because the money is there does not mean the program is a sure-fire bet to come to fruition.
What Students Need To Know
There are, of course, several things potential benefactors of this program must bear in mind. First and foremost, if you are a current or soon-to-be college student, know that even if this proposal becomes a reality, it will be years before it is implemented. If you’re looking for immediate relief from the high expenses of college, you will have to wait. The current mood in Washington, D.C. is not one of great cooperation and progress, and a plan with a $60 billion price tag is likely to draw criticism and opposition from conservatives who oppose additional expenditures, even though $60 billion is a chump change in light of the federal government’s massive overall budget.
Second, while Obama’s plan, which is called America’s College Promise, is largely based on the Tennessee Promise plan, there is one significant difference. Whereas the Tennessee plan is open only to recent high school graduates, America’s College Promise would make free tuition available to non-traditional students as well. Since the average age of a community college student is 28, this is good news.
Third, America’s College Promise would cover tuition for associate’s degrees as well as courses that can be transferred to a bachelor’s degree program. Additionally, certificate programs would qualify for free tuition, so students would have several options when deciding how best to pursue their education.
Lastly, America’s College Promise in its current form would require individual states to pay for approximately 25 percent of the bill. While some states are both open to the idea and have the funding sources available to do so, other states either have been unwilling to consider such programs, don’t have the money to pay for such programs, or both.
Conclusion
Regardless of the somewhat likely scenario that America’s College Promise doesn’t ever come to fruition, it poses a glimmer of hope that lawmakers are at least thinking about how expensive college has become and are thinking of ways to improve access to higher education, particularly for poor students. Perhaps if a nationwide program for tuition-free community college isn’t viable, the discussion that has resulted from such a proposal may induce states to tackle the issue themselves. As millions of college students look on, there is at least some hope that a more affordable college education is somewhere on the horizon.
Additional Resources [+]
comments powered by Disqus
Careers: Marine Biologist
Combine underwater adventures with scientific discoveries and crystal blue waters, and you may have a dream career as a marine biologist. Learn about how you can start your marine biology training right at community college!
Cursing in the Classroom: Professor Ousted for Swearing
In a Hawaii community college philosophy course, a professor used profanity to get students' attention and inspire independent thought, but the efforts may have backfired.
Why Community Colleges Will Soon Be Accepting High School Sophomores
The next wave of community college students may just be high school sophomores. Learn about the new program that allows high school sophomores to graduate at 10th grade and proceed directly to community colleges.